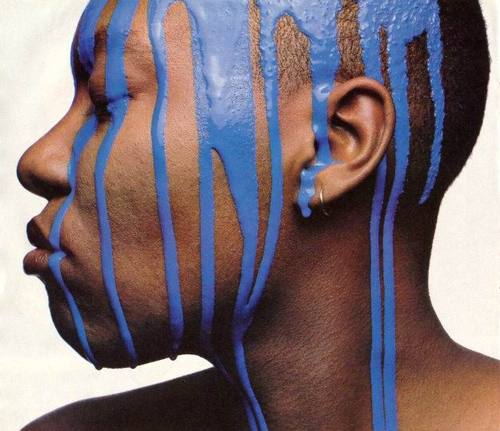 ...born michelle johnson in 1969, me'shell ndegéocello spent the first years of her life in germany. the daughter of a devotely religious mother and a strict military father, the family relocated to virginia in the early 1970s. though discipline prevailed in her home life, her father's occasional gigging as a jazz saxophonist provided her an introduction to music and set her on the path that would lead to international success. as a teenager, ndegéocello's interest in music lead her to the nightclubs of washington, d.c., where she played bass guitar.

at about the same time, ndegéocello began an exploration of her sexuality that would eventually become an aspect of her public persona almost as prominent as her musical acumen. though her first romantic relationship with a woman left her feeling an outsider, her musical ambitions were left unscathed. disillusionment with the duke ellington school of the arts' predominantly male jazz department led her to howard university, in the late 1980s. ndegéocello's howard career, however, would be cut short by an unplanned pregnancy which resulted in a panicked retreat to new york.

askia ndegéocello was born in 1988 to a mother who worked various odd jobs to provide for her son. auditions for a number of bands—most notably, living colour—led to a job with women in love. though bass players have rarely been the centerpiece of a band, ndegéocello's presence was every bit as commanding as her talent. at a new york rock protest, she captivated audiences and captured the attention of a would-be maverick scout by taking control of the performance with improvisational material created with a bass guitar, a drum machine and a keyboard. the first female artist signed to madonna ciccone's maverick label, the release of 1994's plantation lullabies offered a unique musical perspective, the likes of which had not been witnessed since tina turner snatched a mic and invited herself to front for ike turner's kings of rhythm. claiming as her own a fusion of rock and funk—two genres predominated by males—ndegéocello predated erykah badu and lauryn hill with her brazenly unapologetic resurrection of music dependent upon equal parts talent and showpersonship. ndegéocello drew parallels between her own personal narrative and the early-american slave trade claiming, "anywhere you feel trapped is a plantation. these songs i wrote to soothe all this stuff that was going on in my mind." her debut single, "if that's your boyfriend (he wasn't last night)", not only introduced the world to bass-playing talents that would earn her the distinction of being the first female "bassist of the year" to grace the cover of bass guitar magazine, but also ruled the dancefloors of 1994 in the form of a slicky-produced remix that capitalized on the club-culture skills of lil' louis, while perserving the integrity of ndegéocello's funkdafied rock. the lyrics of "if that's your boyfriend (he wasn't last night)" managed to start a quiet revolution of their own. though her sultry rap-sing vocals spoke of her role as point-person in a heterosexual love triangle, ndegéocello's lyrics set the stage for her unapologetic self-identification as an african-american, bisexual, female rock star.

blurring the lines of sexuality and musical genres, ndegéocello posed a threat to the status quo of the music industry. compared to such musical visionaries as al green and prince, ndegéocello has even escalated the divine confusion she's created by referring to herself as the female bruce springsteen—a comparison punctuated by her duet with john mellancamp on 1994's "wild night". 1995 saw another successful collaboration with the queen of funk, chaka khan, on "never miss the water". aside from gaining status as a sought-after collaborator and earning three grammy nominations for her debut release, me'shell ndegéocello was also asked to contribute her talents on such worthwhile causes as ain't nuthin' but a she thing and lilith fair, vol. 3. equally as sought-after to appear on soundtracks, ndegécello's work can also be heard on white man's burdern, money talks and living single. ndegéocello's follow-up, 1996's peace beyond passion took as its metaphor religious mythology, structuring itself loosely around the bible. "leviticus: faggot", for example, traces the tale of a young man forced onto the streets by unaccepting parents, while "mary magdalene" finds the unlikey diva making declarations of love to the bible's most famous prostitute to waltz timing.

while ndegéocello did not release an album of her own between 1996 and 1999, she definitely did not fade from the public's memory. in 1997, the success of her debut single was relived by ndegéocello and rapper queen pen on the later's debut album, my melody. "girlfriend", a song structured around the hook of ndegéocello's 1994 hit, earned more attention for its subject matter than for its solid beat and clever rhymes. with the help of ndegéocello herself, new-girl-on-the-block pen recounted the tale of a love triangle in which she found herself involved with another man's girlfriend. considered revolutionary for attacking the homophobia of the hip-hop industry ndegéocello reasserted herself as somebody who would not back down, while pen established herself as an up-and-coming player in the world of rap.

ndegéocello's third album, bitter, was released on 31 august 1999, both her admirers and detractors waited with bated breath to see what this one-woman phenomenon would do next. in the 31 july 1999 issue of billboard magazine, ndegéocello sumed up the new album by saying, "bitter is about duality and contradictions, about love and hate, about relationships, about how we are all perfect beings struggling to find peace in a world of contradictions…the world is made up of 10,000 joys and 10,000 sorrows, and i wanted to celebrate that sentiment on this album." the album proved to be a tour de force featuring lush orchestrations recalling phil spector's "wall of sound". as promised, the album used the metaphor of a relationship to depict and celebrate the 10,000 joys and 10,000 sorrows of the human condition.

while ndegéocello's undeniable talent as both a musician and singer easily establish her as a 90s diva, she offers a considerable lot more. railing against racism, sexism and homophobia with quiet strength, ndegéocello contributes much more to society than just her music. a german-born, african-american, bisexual, artist and mother, ndegéocello is a new kind of every-woman who has the respect of her peers and her fans, and has clearly redefined the term "diva" to mean bald-headed, bass-playing funkdafied soul sista.

Comment by Edie Antoinette on November 9, 2007 at 11:08pm
Thanks Brn...I love MeShell immensely! Talented is an understatement...